“This is what I am here for!” I thought to myself as I stood in the refreshing water at Honeymoon Beach.
Blue skies, sunshine, rocks, shells, and beach. At last.
A little seal even sauntered by and seemed to give me a wave before he glided into the waves.
But emotions are so fickle. It wasn’t long before the concern for my aching leg overshadowed the beauty of the day.

Rocky and Karin were away, but Vicky (not quite as feminine as the name suggests) came out to greet me at Farm Brazil.
“Nee dis ‘n babatjie naam daai.” he said when I enquired as to the nickname.
An old nylon string guitar was lying on the couch and soon enough an impromptu jam session ensued, Vicky on guitar and Grant on the uke. Yet more proof of the capricious nature of man, this was all I needed to lift my spirits.

The next morning was another stunner. Vicky and Flexi the Faithful walked the first kilometre or so before heading back to the farm. But sure enough, concern stole the show again.
Worry is such a sickly and silly thing. It is a useless waste of energy and achieves absolutely nothing. We all know it, but do it regardless.
“Keep your head up, keep your heart strong…” I sang, trying to keep myself positive, when all-of-a-sardine I came across another dead seal.
But wait, it’s still breathing! Perhaps its last breaths then?
I was standing perhaps a metre away when it woke up with the fright of it’s life! It snorted and grunted as quick as it could back down to the ocean. Not quite the traditional seal sounds I have become accustomed to while playing social league hockey…
Sleeping seals seemed the theme for the day as I encountered two more later on. Hilarious creatures those.

New moon meant the stars were out in full force. So I hauled my sleeping bag and mattress out of my tent and lay instead under the canopy of little lights. I was taking a chance as there had been a fair amount of moisture in the air each morning. At about 04:30 I was driven into my tent… Not by precipitation as I had feared, but by the sheer cold! The nights are still cold up here this time of year. I’ll have to give the sleeping-outside idea a go some other time.

“Jy worry vir niks!” I told myself the next day.
I felt a bit low on energy, but the leg was feeling better each day. The lethargy however was exacerbated when I just didn’t seem to reach the Arosa Shipwreck.
“I should have seen it by now!”
I kept checking the waypoint on my GPS until it indicated that my intended campsite was one kilometre directly East. Strange.
I didn’t feel like trekking inland on a whim so I kept going. After a few more kilometres a wreck came into sight through the ocean haze.
A faint glimmer of hope rippled through my mind, “Maybe it’s the Piratiny Wreck.”
“Don’t get your hopes up, Grant” I cautioned.
I took a deep breath before looking at the sign.
Expectation is a strange thing - it can really wreak havoc with one’s mental state.
I let out an excited (and distinctly unmanly) shriek as I read the word “PIRATINY”. I had overshot the Kliphuis - my intended stop - by about 5km.

After nearly an hour long photoshoot I decided the best was done and turned towards my tent. Out of the fading blue a shadow darted towards me. Falcon-like it stooped right past me and landed on the very top tip of the wreck; handsomely sillhouetted by the setting sun. The pair of rock kestrels roosting on the wreck extended the photoshoot until there was no light left to shoot with.

“Wow!” I gasped as Lionel opened the door.
With a shortened walk due to yesterday’s miscalculation I had all afternoon to enjoy the serenity at Noup. Adorned with a stack of home-made-from-the-land-and-sea decorations these old divers’ huts have been beautifully transformed into quaint and comfortable getaway spots. The cold shower did wonders as I scrubbed off four days of sunscreen and sweat.

Nothing beats the sound of a coke can being cracked open. Aletta had stopped by with a care package of lasagne, fruit, sweets and hot chocolate.
When the last rays had withdrawn from the window I lit the candles and set the water to boil.
Tonight I feast! 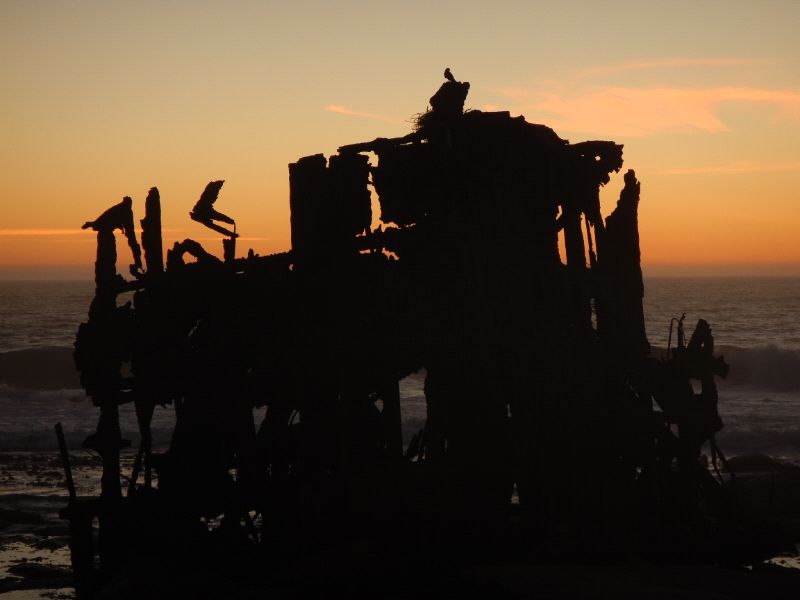