*Warning: This post contains images of a potentially distressing nature.

As I approached she strained to lift herself up onto her flippers and hustled down towards the ocean. But unlike all the others she didn’t glide off into the waves. She stopped, turned and looked back. Desperately she called to her tiny pup, imploring him to follow her to the safety of the water. Blind and bewildered, he bleated back but he didn’t budge. 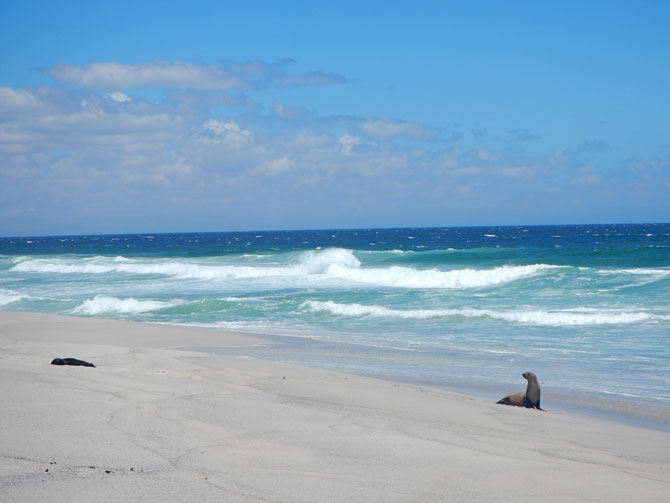 Perhaps he thought I was his mother as I knelt down beside him. But she was watching anxiously from amongst the waves. Samuel I called him. With tears rolling down my face I walked away, looking back every now and then to see if his mother had returned to his side. After a few hundred meters, overcome with emotion, I fell to my knees and wept.

This little chap, mere days old, didn’t stand a chance. And there was nothing his mother could do to help. Weak and underfed herself, she couldn’t produce the milk needed to sustain him. If mom starves, baby starves. 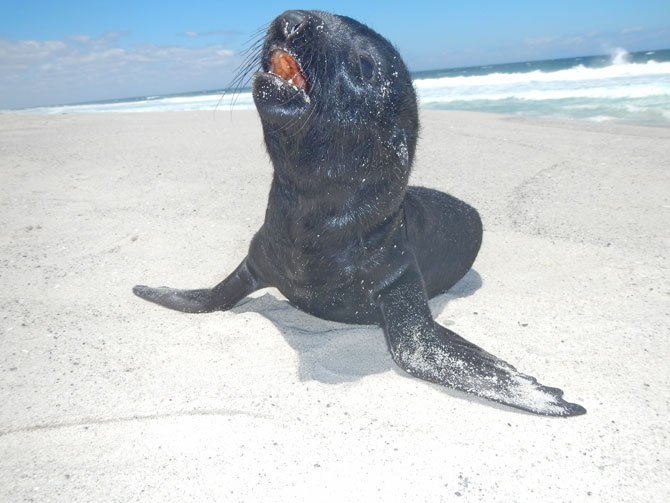 A few days ago in Lambert’s Bay, I had told Yves – a Lambert’s Bay Bird Island conservationist – the story of the all the seals I’d come across on the beach. “A seal on the beach is a sick seal,” he had told me.

“I thought they were just chilling on the beach, warming up in the sun.” I’d said, revealing my naivety.

The anguish in his voice was tangible.

With my heart heavier than my rucksack I picked myself up and leaned into the stiff south-wester. As the blistering wind whipped sand across my legs I trudged past corpse after rotting corpse; each one a graphic reminder of the cruel fate awaiting the little pup. Periodically I lashed out with my trekking poles, taking my emotions out on the plastic bottles discarded by tacky human beings. 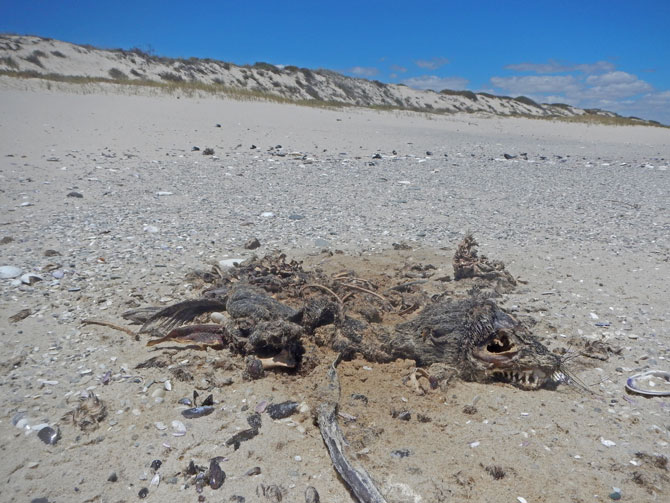 A sacred ibis picked at the bones. Every time I got close it would fly ahead to the next carcass. Taunting me. Reminding me. Not even the howling wind could drown out Samuel’s desperate cries, now forever etched in my mind. Ten kilometres further on a pup of Samuel’s age lay motionless. The crows had already pecked out his eyes, his dignity, his very soul. The sight brought another flood of tears. After that I felt terrible every time I disturbed a seal. They’d use what little energy they had left to dash back into the icy water. Some of them didn’t have enough strength. They had only enough life left to open their eyes as I walked by.

I counted 86 dead seals in just four kilometers before Lambert’s Bay. Over the last four days between Doringbaai and Draaihoek I have walked past over 2 000 carcasses at varying degrees of decay. 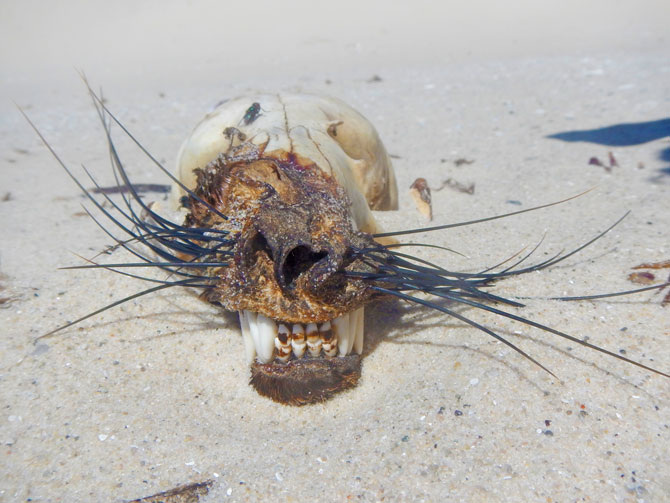 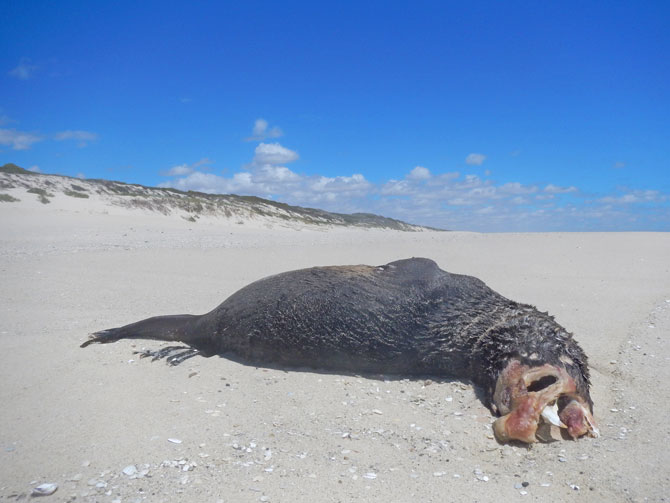 The problem is not seals dying off. The concern is that it is a symptom of a far greater problem. Fish stocks are being depleted at rapid rates. And yet recreational fisherman with sports licenses are up in arms because of the reduced crayfish season. Seals (and people) who depend on fish for their very livelihoods are starving, and yet we complain because we can’t have some fun this weekend and braai some kreef.

Yesterday the sea and sweat left my face caked in salt. Today my cheeks were seasoned by tears. I didn’t stop to rest or shake sand out of my shoes. I didn’t eat or drink. I didn’t sing. Today I mourned. By the time I had taken my last step for the day, Samuel had probably taken his last breath.

RIP little Samuel. You will always be remembered. 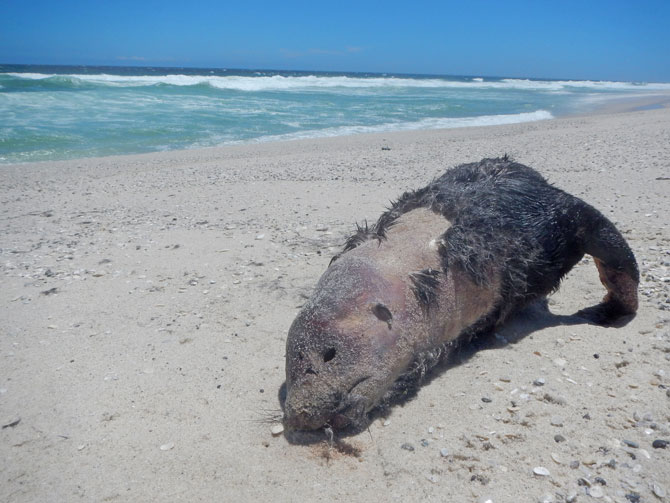 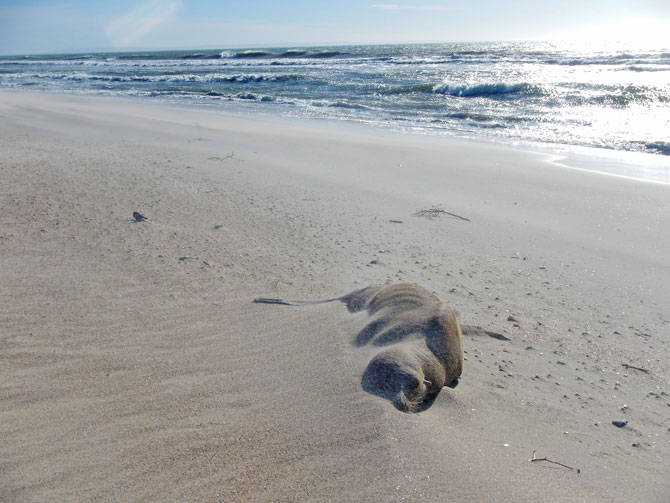 *What can we do about this?

1. Be a responsible consumer: Check the SASSI list and only eat fish on the green list. (SMS the name of the fish to 079 499 8795 to check). Say goodbye to that tuna mayonnaise sandwich… most tuna species are over-exploited. Don’t buy “cheap” crayfish. It was probably caught illegally. Don’t waste food.

2. Be a responsible fisherman: Don’t exceed your quota. Don’t fish outside of permitted times. I don’t care if your papa and oupa have been doing it for decades! Report illegal fishing and poaching